[OCA Youth/Andrew Boyd]—Five young adults representing the Orthodox Church in America were among the forty-plus participants from around the world who attended the international Orthodox youth festival, “Attaining Conciliarity,” at the Monastery of the Annunciation’s Academy, Suprasl, Poland, during the last week of August 2015.  They also attended services for the Great Feast of the Dormition at the Monastery of the Nativity of the Mother of God in Zweirki and celebrations marking the 35th anniversary of the Orthodox Youth Fellowship of Poland, presided over by His Beatitude, Metropolitan Sawa of Warsaw and His Eminence, Archbishop Jacob of Bialystok.

Sponsored by Syndesmos, the World Fellowship of Orthodox Youth, and hosted by the Orthodox Church of Poland, the gathering marked the first time since 1998 that youth from the OCA are participating in such an event.

“This trip showed me how Orthodox Christians from vastly different backgrounds—personally, nationally, from majority churches, from minority churches, and with widely differing opinions—can come together as the one Body of Christ, united by love in the Holy Spirit, strengthening the life of the whole Church,” commented William Kopcha. “Additionally, since the working language of Syndesmos is English, as native speakers we took on a very unique role in terms of being moderators and general resources, guiding the discussions and providing appropriate vocabulary and context.”

“On an average day, we would have morning prayers and then breakfast, followed by small-group discussions and then a speaker,” William added.  “The afternoon saw some free time, during which we might rehearse some music, and another discussion in the afternoon.  In the evening we did evening prayers as a group or head to the monastery church for vespers or vigil.”

Participants were also able to make personal pilgrimages to the famed monastery at Grabarka, Saint Mary Magdalene Cathedral in Warsaw, and the Nativity of the Virgin Mary Monastery in Zwierki, where the relics of the Holy Child-Martyr Gabriel of Zabludow are enshrined.

Other youth movements represented included the Orthodoxer Jungenbund Deutschland from Germany, the Transfiguration Brotherhood and the Kazan Youth Organization from Russia, the Brotherhood of Orthodox Youth from Slovakia, Nepsis from Romania, and the French Orthodox youth organization, ACER-MJO.

Syndesmos was established in Paris, France in 1953 as a way to connect Orthodox youth and young adults the world over.  In the weeks ahead, a special feature article on Syndesmos, highlighting the Orthodox Church in America’s participation in the organization since its inception, will be featured on the OCA web site. 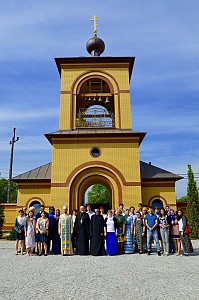 Victor Lutes represented the Archdiocese of Washington at the Syndesmos international gathering in Poland. The following link has photos taken by Victor which document the gathering.