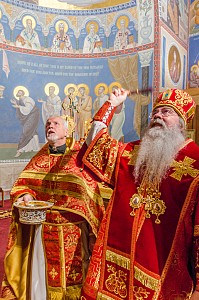 On Sunday, September 18, 2016, His Beatitude, Metropolitan Tikhon made a pastoral visit to St. Mark Orthodox Church, Bethesda, MD. After the Liturgy service, His Beatitude, blessed the new iconography and posed for a photo with the iconography committee. The iconography committee was formed in 2013 at the parish's annual meeting. Later that year, Dimitry Shkolnik was approved by the parish to carry out the work in the sanctuary. The iconography team ( Dimitry Shkolnik, Alexey Vronskiy, Alexander Chernyy, and Alexander Mchedlishvily) arrived on Wednesday, October 15, 2014, to begin work on the first phase of the sanctuary iconography project. After four weeks of work, the apse itself was completed with the Platytera, Liturgical Hierarchs, and Communion of the Apostles. Phase two began in the fall of 2015 with the icons of the Annunciation, Nativity of our Lord, Theophany, Transfiguration, Pentecost, Crucifixion, Resurrection and Ascention. Phase two was completed the day before Christmas Eve, December 23, 2015. The Exhibition of the Metropolitan Museum/Repository of the Orthodox Church i...
30 Jul 2022 at 2:57pm