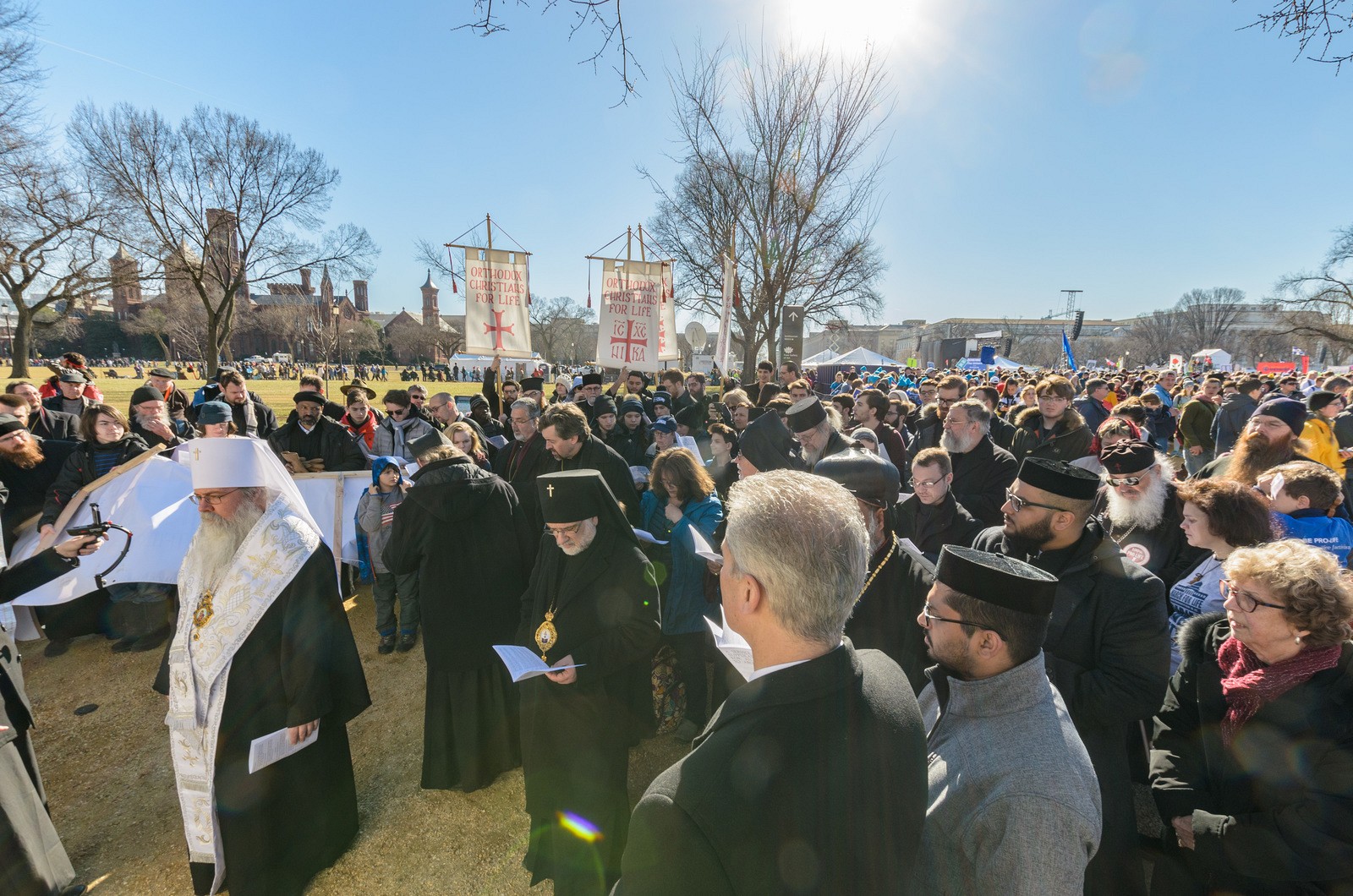 Tens of thousands of pro-life marchers from across the United States gathered in the nation’s capital on Friday, January 19, 2018 for the 45th annual March for Life.

The annual March marks the anniversary of the January 22, 1973 Roe v. Wade decision that legalized abortion in the United States.  The theme of this year’s March was “Love Saves Lives.”

As reported earlier, His Beatitude, Metropolitan Tikhon, led the Orthodox Christian hierarchs, clergy, seminarians and faithful at the March.  Other participating hierarchs included His Eminence, Archbishop Melchisedek of Pittsburgh and His Eminence, Archbishop Michael of New York.  In addition to representing the Holy Synod of Bishops of the Orthodox Church in America, Metropolitan Tikhon represented the Assembly of Canonical Orthodox Bishops of the United States of Americaat the request of His Eminence, Archbishop Demetrios of the Greek Orthodox Archdiocese of America, who chairs the Assembly.  Also present were numerous hierarchs and representatives of the Oriental Churches and other traditions.

On the eve of the March, Metropolitan Tikhon was among those who attended a Prayer Vigil at the Basilica of the National Shrine of the Immaculate Conception, Washington DC.  Presiding at the Vigil, which was organized by United States Conference of Catholic Bishops, was His Eminence, Timothy Cardinal Dolan of New York, who together with other Roman Catholic hierarchs extended a warm welcome to Metropolitan Tikhon and those accompanying him.

“As life is one, all violence of any kind is of the same essence, the tearing of the one tunic,” Metropolitan Tikhon prayed.  “The tearing of the tunic will take many forms, abortion, execution, war, racism, genocide, oppression, slavery, hatred of any kind, but the essence of all is one and the same.  All such acts are only symptoms of one and the same illness, ‘the sin of the world,’ of which we are all part, which is self-love.”

The text of Metropoltan Tikhon’s opening prayer appears below.  A related video also is available.

Among those joining Metropolitan Tikhon on the stage were Archbishops Melchisedek and Michael and Timothy Cardinal Dolan.

After offering prayers for the victims of abortion, Metropolitan Tikhon led the Orthodox Christian marchers, which included a strong representation from Saint Tikhon’s Seminary, South Canaan, PA, and Saint Vladimir’s Seminary, Yonkers, NY.  After the March, the seminarians were hosted for dinner by the faithful of the OCA’s Saint Nicholas Cathedral.  Among the marchers was the Roman Catholic Archbishop of Galveston-Houston, His Eminence, Daniel Cardinal DiNardo.

A photo gallery is available on the OCA web site and Facebook page.

I don’t come here to represent an ideology or to put forth a new thought.

I am not here to disclose a new insight or to speak for others.

I don’t even come here to speak for myself.

I come here to speak out the Gospel, to speak for the One Who died “for the life of the world.”

In this phrase I see the summary of all that our communion today is about.

And so, together with my brothers from the Eastern Orthodox, Oriental Orthodox and Roman Catholic traditions, I ask you to join me in offering a prayer to the One Who died, not for the lives of the world, but for the life of it.

O Lord Jesus Christ, we know that all things and all people of all times share a kinship, a oneness that even surpasses our understanding.  They all have one life and one life only, flowing through everything that breathes and everything that exists.  When You came into the world, You did not just become human, but You also took on this one life and clothed Yourself with it, making it Your seamless tunic.

As life is one, all violence of any kind is of the same essence, the tearing of the one tunic.  The tearing of the tunic will take many forms, abortion, execution, war, racism, genocide, oppression, slavery, hatred of any kind, but the essence of all is one and the same.  All such acts are only symptoms of one and the same illness, “the sin of the world,” of which we are all part, which is self-love.

It is tempting to place blame for death only on some, but to be pro-life means to understand that violence is not the sin of some, but of all, that all violence of all time is the sin of all.

The truth is that every human being is Your image and everyone’s life finds infinite value in You, regardless of one’s sins.

Be persecuted, but persecute not.
Be crucified, but crucify not.
Be wronged, but wrong not.
Be slandered, but slander not.
Have clemency, not zeal, with respect to evil.
Lay hold of goodness, not justice.
Justice does not belong to the Christian way of life, and there is no mention of it in Christ’s teaching.
Rejoice with them that rejoice, and weep with them that weep: for this is the sign of limpid purity.
Suffer with the sick, and mourn with sinners; with those who repent, rejoice….
Be a partaker in the sufferings of all men, but keep your body distant from all.
Rebuke no man, revile no man, not even those who live very wickedly.
Spread your cloak over the man who is falling and cover him.

My Brothers and Sisters,

Let us be pro-life and thus not oppose Christ’s dying for the life of the whole world.

Let us be pro-life and be against anything that injures life, against any violence, under any circumstances.

Let us be pro-life and understand the kinship of all people and even of all other creatures and all things.

Let us be pro-life and thus become unable to endure the injury done to any creature.

May we be all this to the glory of our Almighty God, revealed in Trinity at the river Jordan, the Father, the Son, and the Holy Spirit, both now and ever and unto ages of ages. Amen.