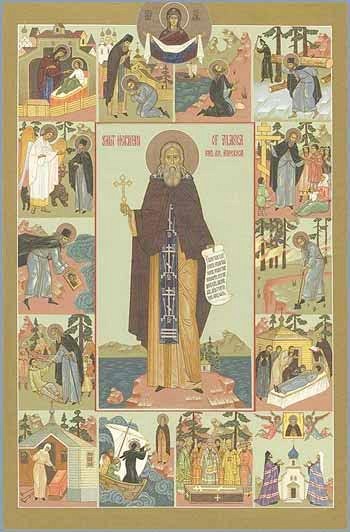 SYOSSET, NY [OCA] Two new resources that will aid in the study of the lives of North America’s saints are now available—a series of “life icons” and a video-lecture on the martyred Saint Juvenaly of Alaska.

A “life icon” is one in which a series of smaller icons showing specific events in a saint’s life surround a central panel depicting the saint in glory.  In spring 2015, resources explaining the life icons of three North American saints—Herman, Jacob Netsvetov and Tikhon of Moscow were made available.  Five additional icons—those of Saints Alexander Hotovitzky, Alexis Toth, Innocent Veniaminov, John Kochurov and Raphael Hawaweeny—have been added to the completed collection.  The full-color life icons may be downloaded and printed free of charge for use by individuals and parishes.

“Each icon offers a frame-by-frame explanation of individual scenes from a saint’s life with a detailed narrative on the reverse,” said Matushka Valerie Zahirsky, Chair of the Orthodox Church in America’s Department of Christian Education and series editor.  “Studying the icons and the narratives together provides a deeper understanding of who the saints were and what they did and provides an occasion for relating their witness to our own efforts in ‘expanding the Mission’ of the Church in North America today.”

The life icon resources are ideal for use in formal Church school and adult education settings as well as for personal study.  They also may be enlarged and use as decorative inspirational displays in halls, classrooms and other public venues.

Supplementing the life icon series is the DCE’s activity book for children and parents, activity book for children and parents, Saints of North America.  First published in 2007, the book is the work of several authors, with handsome full-page iconographic line drawings by Matushka Christine Zebrun.  It features sections on 12 saints, eight of whom are represented in the life icon series.  It also may be downloaded and printed free of charge.

In related news, a video-lecture on Saint Juvenaly is now available for viewing.  Produced under the auspices of the OCA’s Department of History and Archives by Matushkas Katherine Vitko and Alexandra Safchuk with input from Alexis Liberovsky, OCA Archivist, and technical production by videographer Jim Karabin, the lecture is delivered by Archpriest Michael Oleksa.  It is illustrated with numerous fascinating photos, maps, music and related material from various sources, including the Library of Congress and the Smithsonian Museum, Washington, DC.

“The video untangles the great mystery of the death of Saint Juvenaly, revealing inaccuracies in some documentation and debunking a previously written fictionalized account of his life,” said Matushka Katherine.  “And it traces the historical events concerning the ministry and activities of the first missionaries to North America—history that has been preserved for us by some surprising non-Orthodox sources!”

Among the recently discovered “revelations” is reference to another, unnamed Orthodox Christian martyr described only as one who “swims like a seal.”

“Described by one reviewer as being like an episode of ‘History Detectives,’ Father Michael’s lecture discusses the meaning of Saint Juvenaly’s martyrdom for us today as members of the Orthodox Church on the North American continent,” added Matushka Katherine.  “It also demonstrates the value of oral tradition in the lives of the Alaskan native people.”